I had not ever heard of a hemangioma (collection of extra blood vessels that have broken through to surface of skin) before having Ella, but now I feel I’m somewhat of an expert. Here is Ella’s hemangioma story:

In the first few hours of life (born 8/2), both my husband and I noticed a white dot with almost a halo around it on her left cheek. We asked the nurses about it and they didn’t really have anything to say and told us to ask our pediatrician when he came and saw her within in first 24 hours. 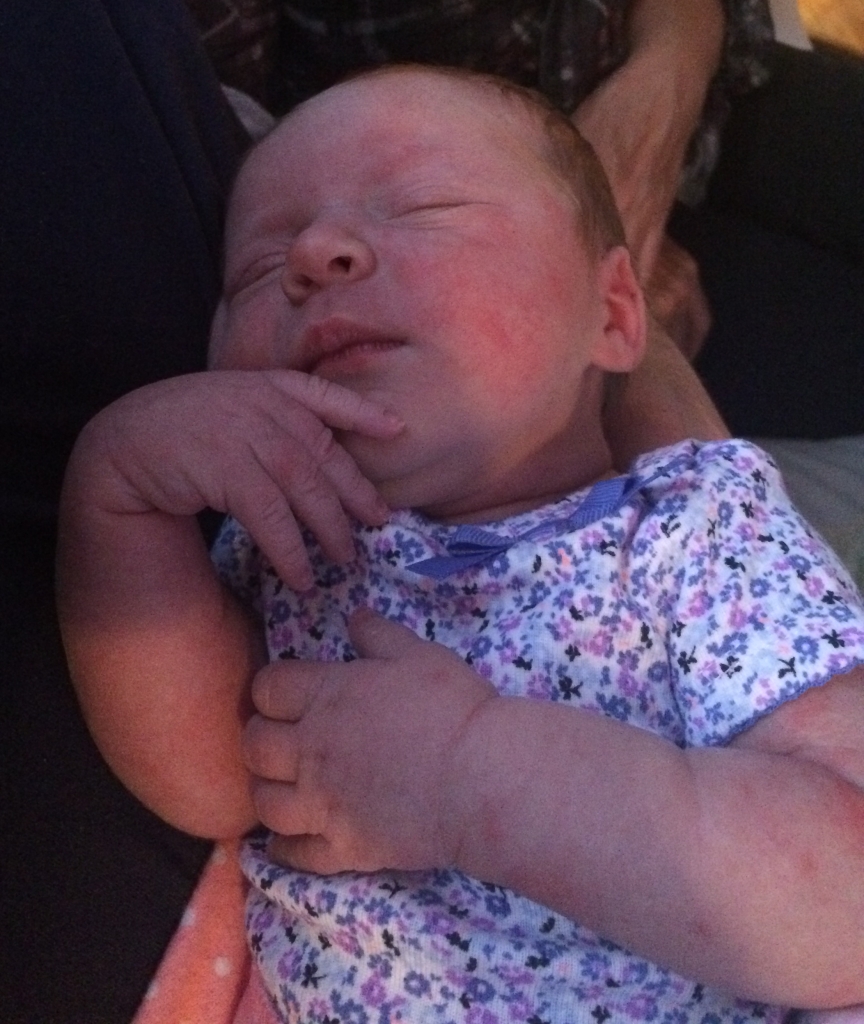 It’s a little hard to see in this picture but it’s the best one we have of the halo. You can kinda see the white halo on her cheek through all the redness she had going on. Pic taken 8/5

We go to Akron Children’s Peds so their hospital liaison pediatrician or whatever he is formally called, came by and we talked about the dot. I honestly can’t remember if he called it a hemangioma or not but he basically told us to wait it out and see what happens.

At this point, I thought maybe it was a pressure point of some sort – that maybe she had been pressed up against something in my belly? I had no idea and wasn’t really worried about it. I was more worried about the fact that I had just birthed a human and was now in charge of keeping her alive. That was my only concern.

By the time we were on our way to Ella’s first ped appointment after being discharged from the hospital the spot had turned a little red but was still small. Now that I was slightly more confident in my roll is “Mom,” I began to worry about the spot.  I’ll be honest, my worries were very vain and centered around her appearance. I thought she was perfect and I wanted everyone else to think so too. Besides, kids are assholes these days and I don’t want that for my baby girl. 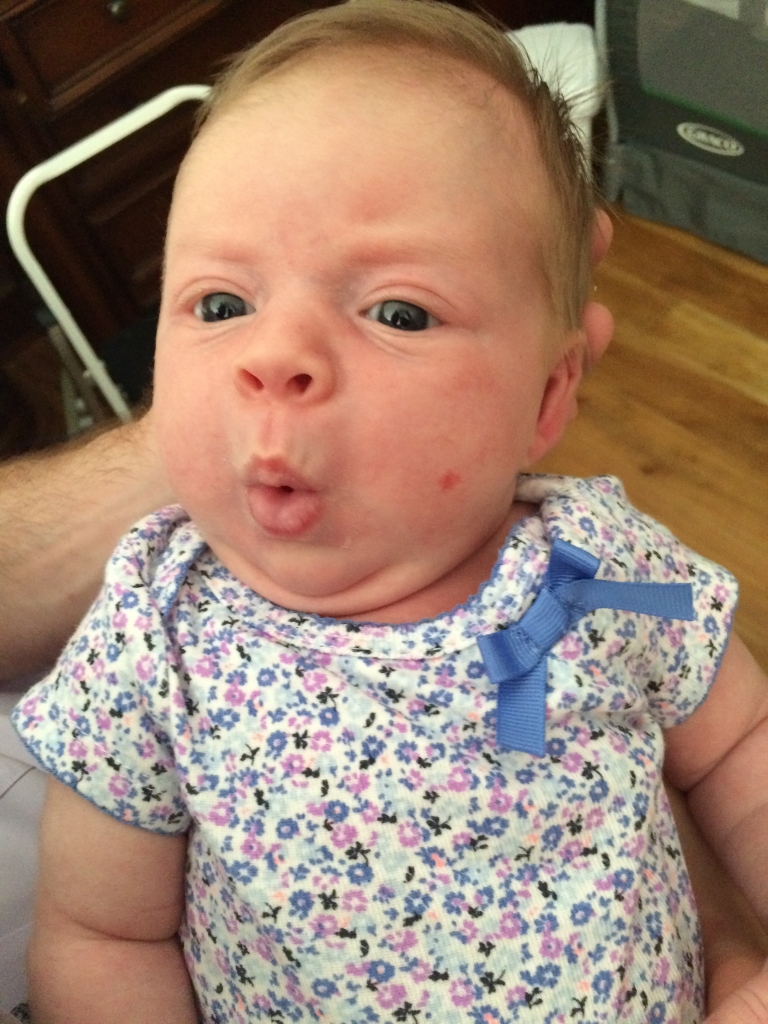 Fun Fact: this was Ella’s poop face for the longest time. Pic taken 8/21

Our main pediatrician told us it was probably a hemangioma and told us that 90% of hemangiomas clear up before the child enters into elementary school. He also said that they usually grow slowly for the first little while and then can go through a “rapid growth stage” between 3-6 months. He recommended no further treatment as Ella’s hemangioma was purely a cosmetic “tumor” (it wasn’t near her eye or nose and wouldn’t effect her ability to thrive) and to just watch it and see what it did.

This type of waiting game doesn’t really sit well with me and my hubby. So we started googling hemangiomas as soon as we got home! Of course the hemangiomas that show up on google are the most serious kind. Some covered a baby’s whole face and others grew so that eyes couldn’t open/close correctly. It made me take a step back and realize that Ella was going to be perfectly fine no matter what. Her little hemangioma was cosmetic and for that I am very grateful.

Over the next few weeks, Ella’s hemangioma continued to grow. It went from a flat, red blotch to a raised, deep red/almost purple bulge. 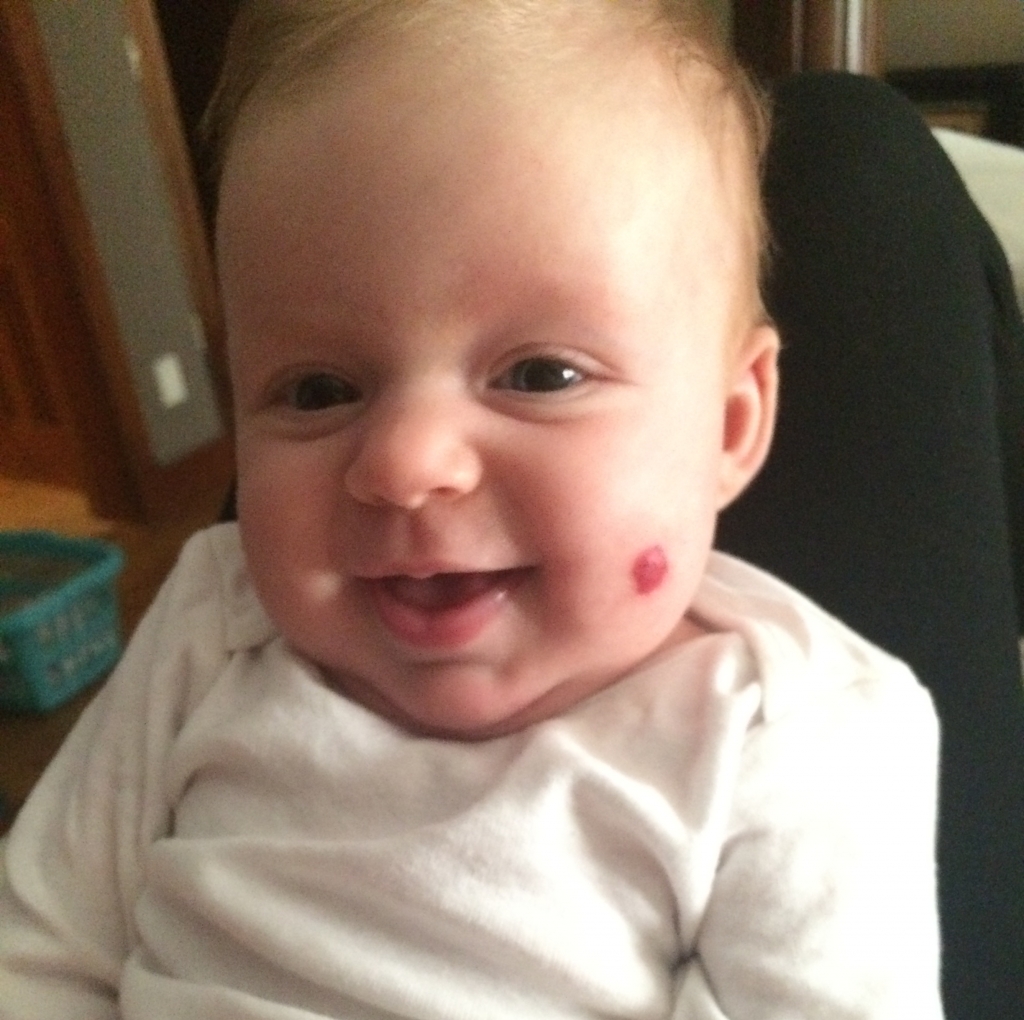 We asked for a second opinion from our pediatrician and were referred to Akron Children’s Pediatric Plastic Surgery. Ella’s appointment was when she was around 1.5 months old. The plastic surgeon offered us two options:

The one she recommended: just wait it out
Another options: oral medication called Propranolol

So Propranolol is kinda scary and this was our first real Parental Decision to be made. Basically Propranolol is a blood pressure medication that was “accidentally” found to help treat hemangiomas. This was the treatment plan:

Ella would need to be hooked up to a heart monitor and a blood pressure machine for a few hours for the first oral dose of Propranolol. She would be monitored to make sure the medication wasn’t messing with her body negatively. After the initial oral dose, we would give her the same dosage for a few weeks at home on our own. After a few weeks, we would need to increase her dosage and would need to come back into the hospital and have her all hooked up and monitored again to make sure the new dosage was still safe for her body. Repeat this process until she was at some magical dosage (I can’t remember what it was.)

Yikes. All that for a little 2 cm spot on her cheek that was only cosmetic. It just didn’t sit right with me and hubs to subject her to that for something that 1. was just cosmetic and 2. might go away on it’s own. We opted to not go down the Propranolol route but still wanted to see if there was something else we could do. 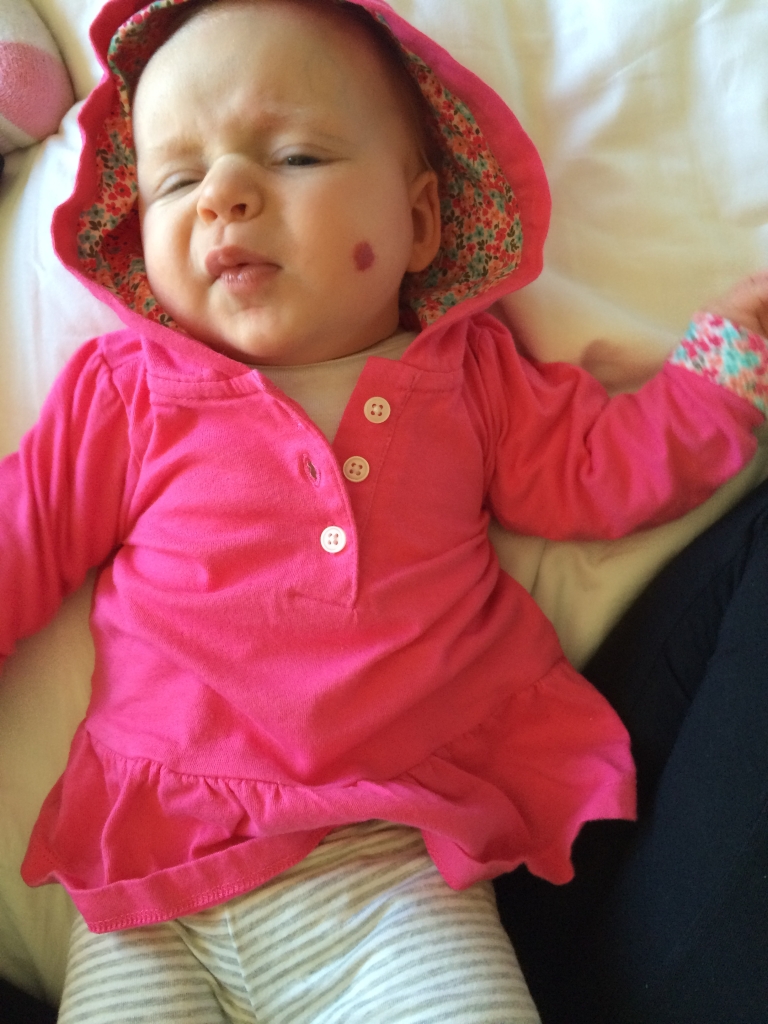 Ella never cooperated when I tried to take pictures of her hemangioma. Pic taken 11/2 while in NYC for appointment.

My husband found the Vascular Birthmark Institute in NYC that specializes in infant hemangiomas. Fortunately, we could afford to make an appointment and make the 7 hour drive to NYC to see what the specialist had to say. Our appointment was beginning of November when Ella was 3 months old. I was so impressed with this office! They were super helpful and very patient with all of our questions. This doctor even took the Propranolol a step farther and told us that it has been shown to cross the blood/brain barrier… meaning that the oral medication has the chance to get into her less than 3 month old brain and do God knows what in there. I took this moment to be very thankful we had opted to not go down that route. We were offered two options here as well:

Timolol is basically a topical version of Propranolol but is considered much more safe as it doesn’t cross the blood/brain barrier. In fact, it really just attacks the blood vessels that you put the gel on. We did a little bit more of our own research and decided to move forward with this topical gel. We put 1 small drop on her hemangioma twice a day; once after her “breakfast nursing” and once after her “bedtime nursing.”

As of today (1/22) her hemangioma is still there but it has gotten a little bit smaller. It is less red and less raised. Honestly I don’t even notice it anymore and will be kind of sad when it’s gone. 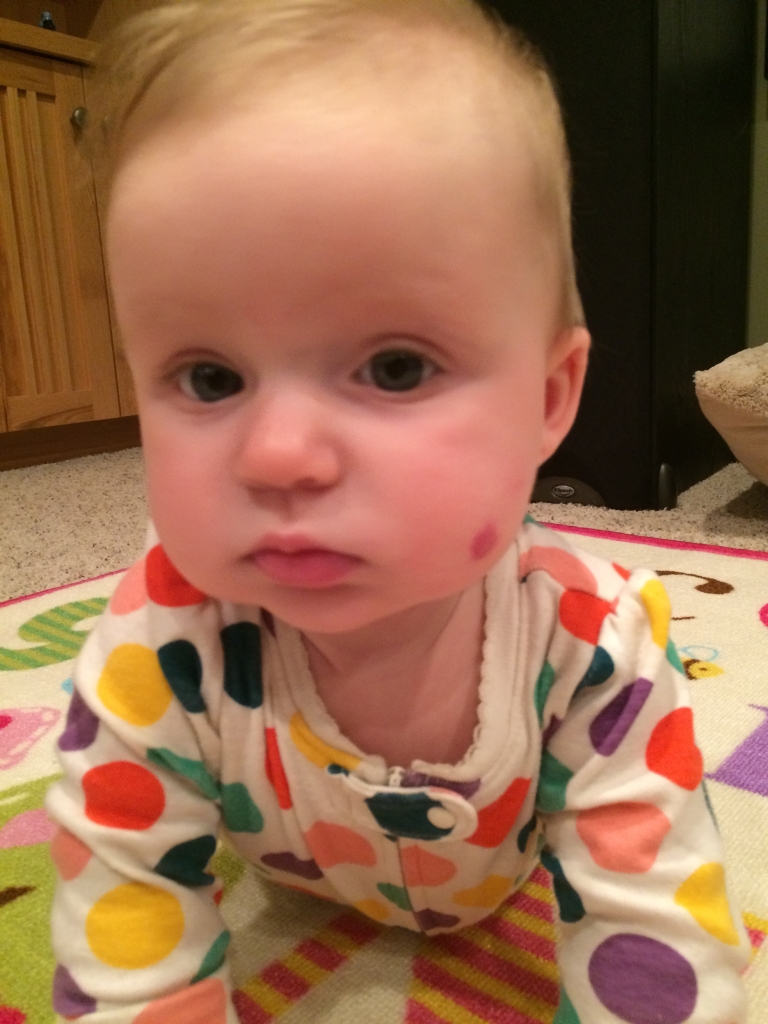 The {Not So Magic} Magic Merlin Sleepsuit