Ella has loved being swaddled since hour 1 of her life. The velcro SleepSacks were our best friends up until about 3 months when she started to roll over! Our favorite were the Summer Infant SwaddleMes – they seemed to hold the velcro tighter and our little Houdini couldn’t break out of them as easy as she could the Halo SleepSacks.

But all good things must come to an end, right? My husband and I weren’t comfortable with her in the SleepSack once she was rolling.. and for whatever reason she rolled from back to stomach weeks before she roll from stomach to back. We tried one arm out of the SleepSack but she would wake herself up every time as her startle reflex was still something serious.

This was the beginning of the end of Ella’s good sleeping until we did sleep training!

To Google I went! I found a lot of posts about Merlin’s Magic Sleepsuit and that it helped a lot of parents/babies in similar situations. Basically the jist is that it’s super padded and it will muffle their startle reflex and since it’s so padded, it’s harder for babies to roll in it. I was sold! Purchased two (one of each size) and waited somewhat patiently (nah, not at all) for the delivery man to bring me my magic! 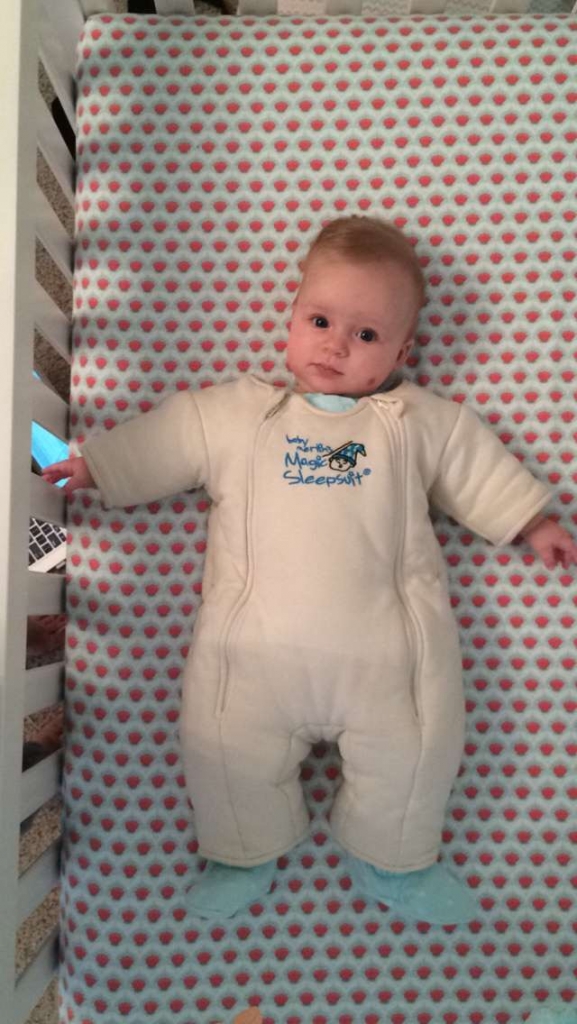 Unfortunately, the suit was not magic for us. It certainly helped which made the purchase somewhat worth it, but it was not the magical experience I was hoping for. Some people use it and their baby instantly sleeps through the night.. we were not one of the lucky ones.

I think it bought us some time in that she couldn’t roll over in it until she was over 5 months old and at that point she was old enough (in our opinions) for some sleep training. Whereas I don’t think sleep training would have worked for us at 3 or even 4 months of age.